Last week select media received a behind-the-scenes look at Disney’s Club Penguin headquarters in Kelowna, British Columbia at its first ever media summit. For those of you who are not familiar with Club Penguin, it is the world’s largest kids’ MMO (massively multiplayer online) game. The average Club Penguin player is between the ages of 8 – 12.

I was particularly interested in Club Penguin’s corporate citizenship and social good efforts. With millions of active kid players that span five languages, Club Penguin effectively uses its online platform to teach children the value of philanthropy. Every year since 2007 Club Penguin has hosted its Coins for Change event where the kids choose (using in-game coins) social issues they want Club Penguin to fund from building schools and libraries in developing countries to helping educate girls in India or bringing clean water to rural villages, for example. To date, Club Penguin has donated over $10 million to charity. 3.4 million kids  have participated in Coins for Change and have used 13.7 billion coins to help choose the issues they want funded.

“We want to give the kids the sense that they can change the world,” said Chris Heatherly, General Manager of Disney Interactive Worlds. “We also want to make a difference in the lives of children around the world,” Heatherly continued.

Nicole Rustad, Corporate Citizenship Program Director at Disney Interactive Worlds, noted that from the beginning Club Penguin wanted to improve the lives of children globally. “We believe that kids can change the world through connected play,” said Rustad. Through Club Penguin-funded programs 200,000 children’s lives are positively impacted each year.

“We bear a responsibility to give back because we won the lottery in life,” she said.

Once Club Penguin players have decided the issues they want funded Club Penguin partners with NGOs to take action. One organization Club Penguin has funded for many years is Free the Children, a Toronoto-based NGO that empowers children to be global change agents. 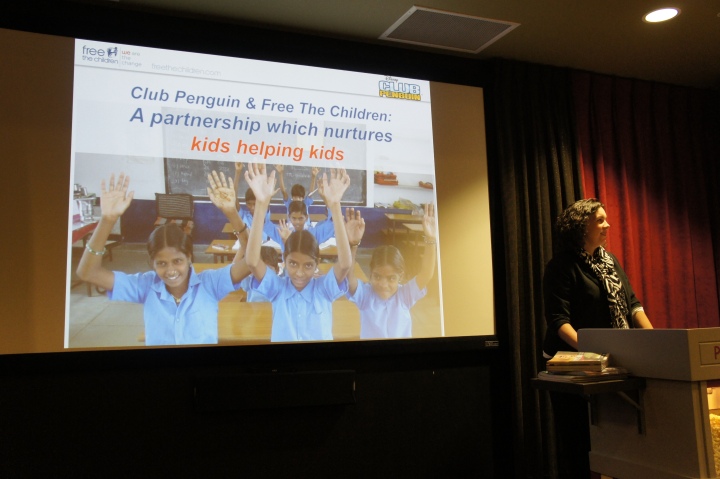 Erin Barton-Chéry, Director of Free the Children’s Development & International Operations, shared Club Penguin-funded projects that have made measurable differences in the lives of children in need. For example, right after the devastating earthquake in Haiti, Free the Children was able to build a brand-new school in a rural area of Haiti where a previous school had been completely destroyed. Barto-Chéry also noted that Club Penguin helps fund Free the Children’s sustainable Adopt a Village program with ongoing efforts in eight developing countries.

Teaching children about philanthropy can be a daunting task, to be sure, but the kids who play Club Penguin seem to get it! Nicole Rustad mention that when presented with three social good causes to fund each year the kids proactively play and earn more coins that they can then donate to Coins for Change. And surprisingly, as a collective effort, the children make sure that each of the causes are equitably voted upon. So, not only do they understand the philanthropic concept, they also believe many different causes should be funded as opposed to one cause over the other.

Club Penguin has made philanthropy a seamless and fun priority for Club Penguin kids’ gaming experience and from the number of children who get involved every year, it’s working.