For over a year the wonderful and dedicated community of mom bloggers, both Social Good Moms and the Global Team of 200 members, has spread the word about newborn health and survival to their massive social networks and have blogged tirelessly about why newborn health is important to them. Over these sixteen months as a community of moms dedicated to maternal, newborn, and child health we have reached tens of millions of parents online through our collective personal social networks, via Twitter chats,  through photo sharing, and through our blogs. And we have had tremendous support from our friends at the Gates Foundation, Save the Children, Healthy Newborn Network, and Every Newborn. As they say: never underestimate the power of moms with one collective voice.

We’re thrilled that May was fantastic for newborns and even more encouraged that our voices mattered in the run-up to the World Health Assembly. The Every Newborn Action Plan, which has been in the works for over a year, was officially adopted by the 67th World Health Assembly in Geneva, Switzerland on Saturday, May 24. The Lancet published the Every Newborn Series that looks at quality care for newborns and draws upon progress that has been made and is lacking since the first series in 2005. And, finally, Canada pledged an additional $3.5 billion for maternal, newborn, and child health.

We’re taking a look back at the important advocacy our network has done over the past 16 months. Time does go fast when you’re having fun.

Social Good Moms tweeted their support of the Every Newborn Action Plan encouraging countries to adopt the plan during the World Health Assembly. We reached nearly 1 million Twitter impacts as a collective voice. See the voices in Mom Bloggers Stand Up for Newborn Health and the impact.

We worked with Save the Children to spread the word about its Ending Newborn Deaths: Ensuring Every Baby Survives report with a 24-hour marathon of tweets and 24 blog posts from Social Good Moms.

The Social Good Moms who tweeted in support of the report sent out 170 tweets, reached 1.2 million Twitter accounts and garnered 1.7 million impressions.

Also, in February we rallied members of the Global Team of 200 to leave comments on the Every Newborn Action Plan WHO page to engage as concerned citizens of civial society. Some of the many comments left by the team were:

“I think the continuum of care is key. The number of stillborn deaths was staggering to me. Access to skilled health care workers during pregnancy and even preconception can clearly make a big difference. Education around these options will be important, particularly in the harder to reach communities.” – Jennifer Barbour

“There needs to be a minimum standard of care that is provided to each country/organization to ensure the quality of care is comparable and sufficient.” – Julia Gibson

“I strongly believe in expanding the training of midwives and frontline healthcare workers on the ground in each country especially in the rural and remote regions of the developing world. Vaccines are also extremely important and effective at saving lives. They are cost-effective it should be ensured that all children are vaccinated on schedule. Education for women on childbirth, pregnancy planning and caring for their newborn (including safe births, the benefits of breastfeeding and the importance of vaccines and regular check-ups) also is very important.” – Nicole Melancon

Social Good Mom and member of the Global Team of 200, Stacey Weckstein, traveled to Indonesia with Save the Children to report on maternal, newborn and child heath. Her updates were fantastic and showed how Save the Children implements programs on the ground.

We co-hosted a #newborn2013 Twitter chat with the Gates Foundation and Dr. Gary Darmstadt, Senior Fellow at the Gates Foundation, to bring awareness about newborn health and survival. The 30-minute chat trended nationally with 566 participants and 2 million Twitter accounts reached. See the recap Storify.

I along with Social Good Mom and Global Team of 200 member, Nicole Melancon, traveled to India for the first Social Good Moms insight trip. We visited Save the Children’s work with mothers’ groups in Delhi as well as a mobile unit for maternal, child, and newborn care, Mothers’ groups are one of the key interventions that help save the lives of newborns through education and awareness.

When Twitter allowed linebreaks we celebrated with Haiku for Newborns. Read all of the haiku on our Tumblr http://haikusfornewborns.tumblr.com/

Precious babies need help today more than ever. Can you give them hope? #newborn2013 #haiku #SocialGoodMoms #GlobalTeamof200

Do you think about a baby’s first day of life? Let’s all make a change. #haiku #newborn2013 #SocialGoodMoms #GlobalTeamof200

Throughout April and May 2013 27 Social Good Moms shared their birth stories to spread awareness about newborn health.  Read all of the stories at http://advocatingfornewbornhealth.tumblr.com/

As a a network of moms we crowdsourced ideas about what we thought should go  into the Every Newborn Action Plan. See the interactive infographic of our suggestions.It had nearly 1000 views and 2441 tag hovers.

We worked closely with Save the Children to spread awareness about their breastfeeding report, Superfood for Babies: How Overcoming Barriers Will Save Children’s Lives. For 24 hours straight 24 Social Good Moms shared intimate stories about their personal breastfeeding journeys while telling their individual audiences about the important work Save the Children does around the world for mothers and their newborns. We chronicled the entire 24 hours on a tumblr blog, Advocating for the First Hour, so these beautiful stories from moms lived somewhere special online. A global effort, moms from the Philippines, Brazil, Indonesia, and Nigeria as well as here in the States participated.

Excellent job by @socialgoodmoms sharing #breastfeeding stories from around the world! ow.ly/hXexD #FirstHour

We also created a fun interactive infographic for the campaign. Click here to see the interactivity. 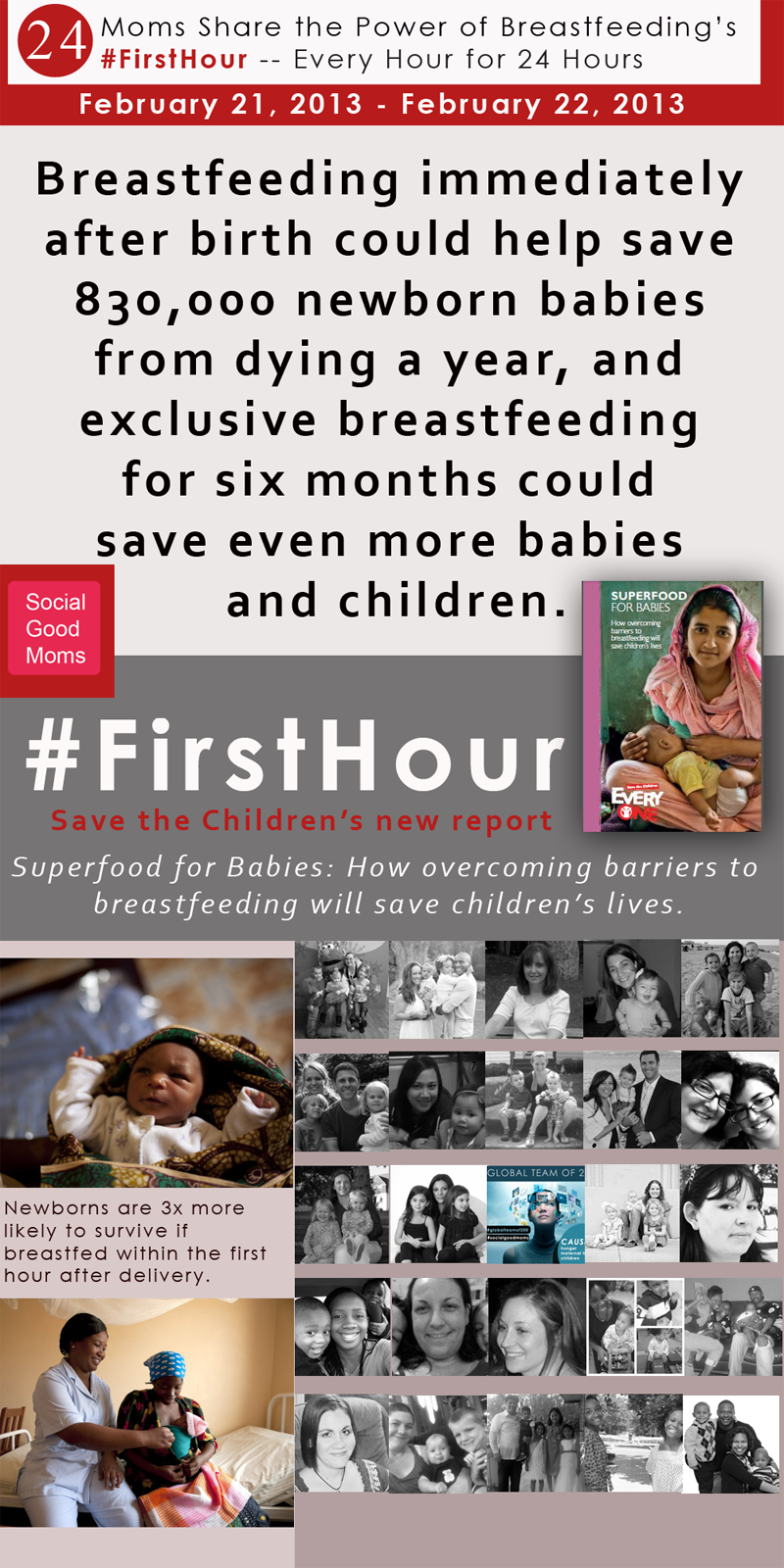 We look forward to continuing to advocate for global newborn health. It’s been a great 16 months.

2 thoughts on “Over a Year of Advocating for Newborn Health”