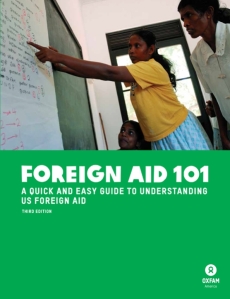 Whenever I go to the Hill to advocate for continued and, more importantly, increased funding for foreign aid I always hear from staffers that their constituents perpetually call their congressperson’s or senator’s office telling them to stop spending money in other countries and use that money at home. What these concerned citizens and so many in the United States, do not understand is that the United States’ federal budget is so unimaginably huge, we spend less that 1 percent on foreign aid (from budget.house.gov).

Consistently over the years most Americans believe the United States spends entirely too much on aid overseas. Since this is wrong, the information is simply not being communicated enough in my opinion. Those in the global health and development community know the right answer, but busy Americans don’t have time to dig into the issues. And that is why false assumptions about foreign aid persist.

In an effort to educate more Americans about foreign assistance, Oxfam America recently launched its Foreign Aid 101 campaign. Utilizing an infographic-rich approach Oxfam America attempts to show the history of foreign aid, where aid money goes, and why foreign aid does not go directly to corrupt governments.

While many of you who are reading this understand how much money goes to foreign aid, there are many who simply don’t know. That’s not their fault, to be sure. Blantant, false assumptions about foreign aid have grown rampant and that is why Americans always tend to cite wrong answers about foreign aid.

United States aid to foreign countries is not without its vocal critics some of who believe foreign aid is a hindrance to a low-or-middle income country’s economic growth. Citing countries like Singapore, Hong Kong, and Taiwan that received barely any aid, but looked to economic growth strategies to make them examples of how a country’s prosperity cannot be yoked by foreign aid.

There have also been recent working papers that show the heightened need for thorough, high-level evaluations on programs that do well, but also programs that fail in order to better determine the effectiveness of foreign aid.

Despite the banter back and forth, the number that always comes up in this conversation is less than 1 percent. What is more telling about the foreign aid conversation is that while the US spends $81 per person on foreign aid, Americans spend more money annually on candy ($101), lawn care ($126) and soft drinks ($204) according to Oxfam America.

While I am now a member of Oxfam America’s Sisters on the Planet I have been advocating and writing about United States foreign aid since 2011.

5 thoughts on “Why Don’t We Spend More Money at Home? Breaking Down False Notions About U.S. Foreign Aid”